Turning Point Ministries was featured in the Daily Oklahoman on May 16, 2009, in Diana Baldwin’s article, “Edmond group helps make room for low-cost homes.”

EDMOND — An old, rundown area of Edmond is changing.

Two tiny houses, in need of serious repair, are coming down as a part of plans to build Legacy Station, a housing addition with 13 new, low-cost homes, said Bob Turner, president of Turning Point Ministries.

The new homes, to be built between Edwards and Thatcher and west of Broadway, are possible through a partnership with the city of Edmond and Turning Point Ministries. 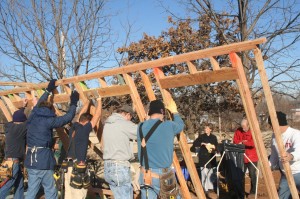 Turning Point Ministries, a nonprofit organization that assists in the housing needs of those in Edmond living in sub-standard conditions, has purchased the 12 lots with additional space for a playgroud.

Edmond city officials have been promised almost $175,000 in federal stimulus money that they plan to spend to improve the infrastructure to make way for the new homes.

Water and sewer lines will be replaced and extended, and a street will be installed so the 13 owner-occupied homes can be built, said Shannon Entz, the community block grant coordinator.

Turning Point will build the three- and four-bedroom homes with two baths and single-car garages. The homes will be between 1,100 and 1,300 square feet, Turner said.

“It is great to see what can happen in this area and how it will affect people’s lives,” he said. “It gives a foundation of responsibility and well-being.
“We will improve an area in the community that isn’t going anywhere.”
Habitat for Humanity has received five applications for houses in Legacy Station. Two of the applicants have already been approved, Turner said.
Turner hopes construction will begin in late September or early October. He said they will start on two or three houses first. He anticipates a house can be constructed in five or six weeks.

Habitat for Humanity hasn’t built much in Edmond because of the high cost of land in the community. That is where Turning Point Ministries comes into play by buying the lots, Turner said.

The ministry is in its second year.

A house in Legacy Station that was going to be torn down was given to a tornado victim.

The house was in fair condition, but needed repairs and did not fit into the plans for the new housing addition, Turner said.

In addition to buying the lots, the ministry purchased a step-up home on N Broadway. Turner said the three-bedroom home was leased to a Section 8 client — a single mother with three children.

One of the children is deaf and needs services available at the University of Central Oklahoma.

The ministry also has purchased two lots in Edmond where Habitat homes were built last year.

The group has purchased a storage facility to warehouse donated furniture and appliances that will be given to Edmond people in need.